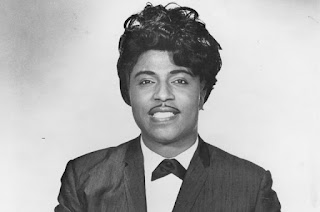 He was a little before my time, but here is what sets him apart.  The man was a pioneer is many ways, the foundation of rock and roll.

When people like Elton John, Michael Jackson, the Beatles and several others point to someone and say "we're here because of him," you have to sit up and take notice.

I should also note a hilarious appearance on "The Drew Carey Show" several years ago, when he sang "Rocky Mountain Way" with Joe Walsh.

Rock lovers owe Little Richard a debt of gratitude and a huge thank you.
AT 12:00 AM