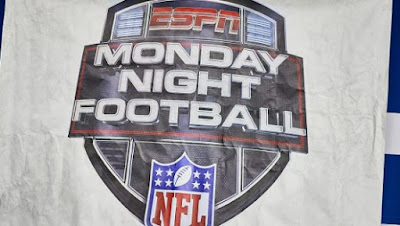 Even though I've been in broadcasting, in one way or another, some things constantly amaze me.

When CBS wanted to replace Scott Pelley on the "Evening News" several years ago, it couldn't attract a big name to the anchor desk.  The network settled on Jeff Glor, who was a solid anchor, but a ratings disappointment.  Glor was pushed aside for Norah O'Donnell after a couple of years.  She hasn't moved the meter much.

As I have always said, the CBS issue isn't an anchor problem.  It gets a horrible lead-in from its affiliates in several big cities, and that really hurts.

Today's entry deals with ESPN's Monday Night Football.  For the fourth time in four years, it will have new broadcasters.  This is one of television's signature packages, filled with history and always a ratings grabber.  I still don't know why ESPN can't settle on a team it likes.

Tessitore and McFarland are out.  No one knows who is in.  ESPN said it will be an internal hire-- announcers and commentators from inside the network.  I've heard several names bounced around.  the one who should be at the top of the list, isn't.  Mike Breen.  The worst I can say about the guy is he's vanilla, but some of the best play by play people have been vanilla.  They know how to set up their commentators.  Breen, already ESPN's top NBA guy, is a perfect choice.  He has NFL experience with FOX and NBC.  He did the NY Giants' pre season games.

I can't say this is an original idea on my part.  Rich Eisen, on his radio show, said Breen is the perfect selection, and I agree.