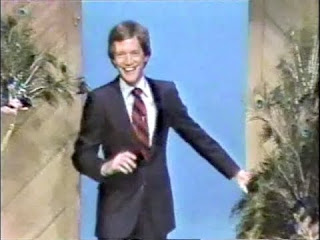 Tomorrow marks the 40th anniversary of David Letterman's last morning show on NBC.  It lasted about five months.  The screen grab above is from Letterman's final AM broadcast.

I've written about it before.  Letterman's morning show was 90 minutes, cut to 60 after a couple of months and it was wildly creative and sunny.  Some college friends became hooked on it during the summer and they actually arranged their fall college class schedules around it.  I caught it at every opportunity, but I'm a morning person and I liked my morning classes.  Sorry, Dave.

Letterman had the right show, at the wrong time.  It was horrible for 10 am.  She show was retooled.  Paul Shaffer replaced Frank Owens and Letterman was given another shot at 12:30 am.  The rest is history.  I read a Letterman biography that said Dave feared his career was over when the morning show was cancelled.  NBC president Fred Silverman canceled three game shows to make way for Dave in the morning, and he brought two back after he canceled Letterman.  Silverman had the great sense to sign Letterman to a contract, even though he had nothing to do before Late Night.

Speaking of game shows, Blockbusters and Las Vegas Gambit replaced Letterman.  I've always given any incarnation of Gambit a "meh."  I'd watch it if I stumbled across it and I had nothing else to do.  On the other hand, call me a big Blockbusters fan.

Letterman describes his morning show experience as saying "every day was a fist fight."  He also said the shows he did after the cancelation notice and before the last show were some of the best he ever did, because there was nothing to lose.  He could relax, be himself, and have fun.

Moral of the story?   Everybody gets a second chance, and sometimes, a third.  You often get stuck in bad situations, but talent wins out in the end.