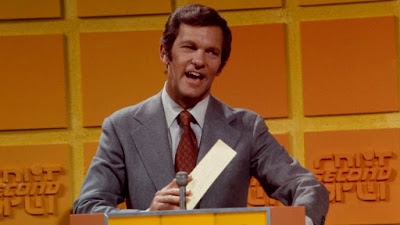 This one hurts.  The news broke Sunday.  Retired game show host Tom Kennedy died last week.  He was one of my favorites.

Kennedy never had a runaway hit, like Bob Barker, Alex Trebek, Richard Dawson, or Pat Sajak, but he did do a lot of shows.  Some were very good.  Some were forgettable.

I think it's fair to say "You Don't Say" was Tom Kennedy's biggest success, but it was far from my favorite.  Kennedy hosted a show called "Split Second" for three years on ABC in the mid 70's.  It's at the top of my list.  There are a few episodes on You Tube.  Check them out.  The contestants had to be smart and fast.  The host needed to be even faster.  There were three parts to every question, so you had all three contestants buzzing in to offer part of the answer.  It was like "Jeopardy," but multiply it by three.  In the final round, contestants could give all three parts to the question.  After the first correct response, Kennedy would say "Correct.  Continue."  I still do it when talking to people.  "Split Second" also had a fun bonus round, which several shows have copied over the years.

Monty Hall, whose production company handled the original, did a "Split Second" reboot several years later, but the pacing was way too slow.  It was awful, and it lasted just one season in syndication.

In the late 70's, there was "Whew!" on CBS.  There was a flaw in the game play, but "Whew!" had to be one of the most fun and visually interesting game shows in television history.  It's too bad that it didn't catch on.

Any Tom Kennedy entry would be incomplete without "Password Plus" on NBC.  Kennedy took over after the death of host Allen Ludden.  When the job was offered, the first thing Tom Kennedy did was ask Ludden's widow, Betty White, if it would be okay.  She gave her blessing and added in her book "Tom took very good care of 'Password.'"

And then, there was one year on the night time "The Price is Right."  As I have said before, TPIR is not one game.  It's 40 games.  Again, a fine job by Tom Kennedy.

There were good hosting performances, even the shows were less than spectacular.  "Name That Tune" never did much for me.  "50 Grand Slam."  "Word Play."  "Break the Bank."  "To Say the Least."

ABC had a game called "Showoffs" in the mid 70's.  Bobby Van hosted.  It bombed.  The producer, Mark Goodson, tinkered with it a bit, took it to CBS, installed Tom Kennedy as host, renamed it "Body Language" and it had a good two year run.