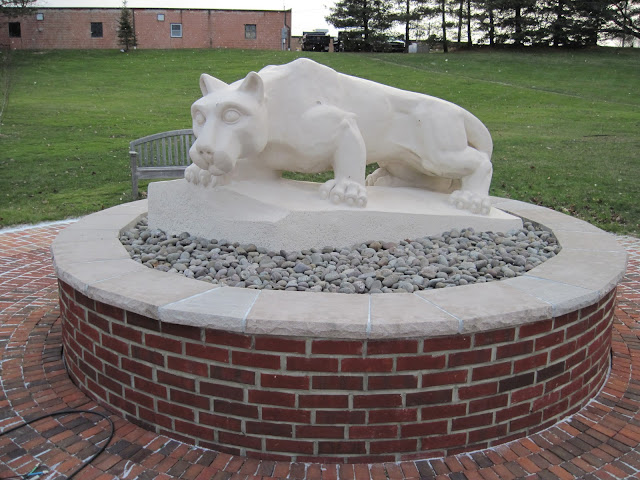 This is turning into a Penn State weekend.  You're looking at the Nittany Lion statue on PSU's Dunmore campus.  I was there a couple weeks ago to "front" an intem on Penn State accepting a bid from the Outback Bowl in Tampa New Year's Day.

The Nittany Lions play the Florida Gators, a pair of 7-5 teams.  I'm old school, and I don't feel 7-5 is good enough for a bowl.  Unfortunately, these days, there are more bowls than there are good teams to fill them, so just relax and enjoy it.

Speaking of Penn State, what was the Big Ten thinking when it okayed its new logo?  It's nothing special.  The league had to make a change because it's expanding to 12 football teams next season.  Change can be good, but this new logo falls far short of the mark.

And, if that wasn't enough, the Big Ten has named its two divisions "Leaders" and "Legends."  What's wrong with east and west?  Or, north and south?

Clearly, the Big Ten over-thought division names, and under-thought its logo.
AT 12:00 AM