We're Not the Only Ones 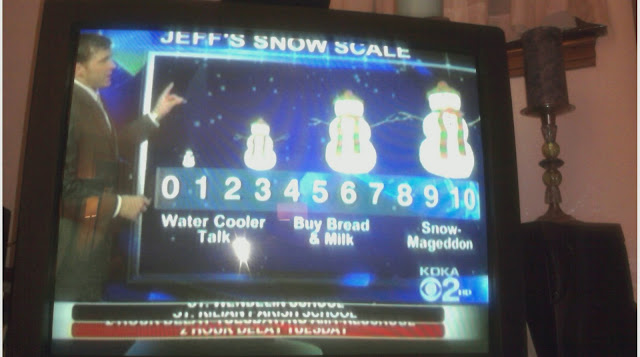 I found this on the Pittsburgh Post Gazette web site Friday morning.  A reader sent in a shot of one of KDKA's weather segments.

Apparently, people in northeastern and central Pennsylvania aren't the only ones who fly to the supermarket when snow is in the forecast.

I have to admit that I have been tempted to head to the store when the forecast turns ugly.  Instead of bread and milk, it's caned soup, Pop Tarts and Diet Pepsi.  Fortunately, I'm usually well stocked, so those storm prompted trips are few and far between.

We all make fun of the supermarket rush, but I can understand it-- especially for families with small children.  You can run out of the staples rather quickly.

For the rest of us, even the worst of storms keeps you off the roads for only a day or two.  There's no need to panic.  The snow stops.  It always does.

By the way, there's big snow possible for the weekend.  Save me some Pop Tarts.  Strawberry.  Unfrosted, if you can.  Thanks.
AT 12:00 AM