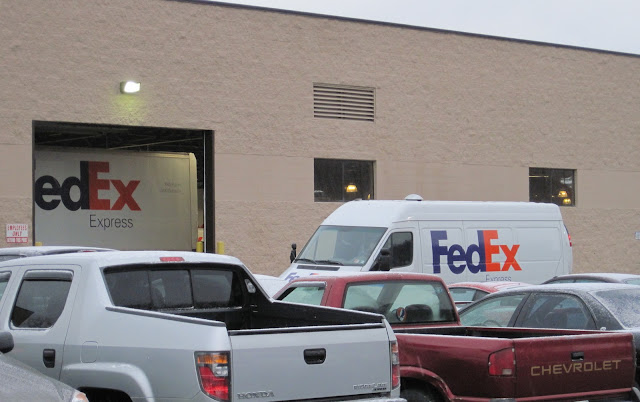 I preface today's entry with the following statements:

I've used Fed Ex many, many times.  There's never been a problem.  The company knows how to deliver a package.

I minored in public relations, and I've been in broadcasting more than thirty years.  I know what I'm talking about.

Today's blog might be too "inside baseball" for many of you, but I'll do it anyway.

Now that those items are out of the way, let me tell you about my Monday.

I was assigned to do a story on Fed Ex because the company was shipping 16 million packages-- a company record.

I looked through our files for some Fed Ex video.  None existed.  The reason for that will be noted later.

We set up one of our microwave trucks at the Fed Ex building in Pittston Township just before 5:00 AM.  Watching all those trucks and vans leave the bays was an impressive sight.  Pictures tell only part of the story.  I needed to speak with someone.

Early Monday mornings are not peak time at the customer service desk.  Only a few people were dropping off packages, and only one had Christmas gifts.  She declined to speak on camera.

I called the Fed Ex media relations office in Memphis, which didn't open until 9:30, eastern time.  By the way, naming the office "media relations" is rather humorous.  The first time I called, I was stuck on hold for seven minutes.  I gave up and called back a few minutes later.  This time, it was voice mail.  I left a name and number.  No one in Pittston Township, or the "Fed Ex Office" store in Wilkes-Barre Township could talk without permission from the home office.  I waited and waited for the return call from the media relations office.  Nothing.  Peak shipping day must have been a busy one, with calls from tv stations, radio stations and newspapers from around the country.  I can understand the demands on the time of the folks in Memphis.

For a while, Fed Ex has been sending out notices on its package shipment milestone.  You think the company would have been ready for the media onslaught on the actual day.  You would also think the media relations office knows something about television news and deadlines.

I realized why we had no Fed Ex video in our files.  It's because the company has never cooperated in the past.  The video we used for our morning broadcast came from one of the networks, who got "handout" video from Fed Ex.

My return call from Memphis came at 11:58 AM.  The media relations person explained he tried to find a local to speak with us, but couldn't.  How many people work for Fed Ex locally?  Hundreds.  He couldn't find one who could tell us what the Christmas rush was like?  Just one?

I told him I had a deadline two minutes away and I already did the story-- with UPS.
AT 12:00 AM