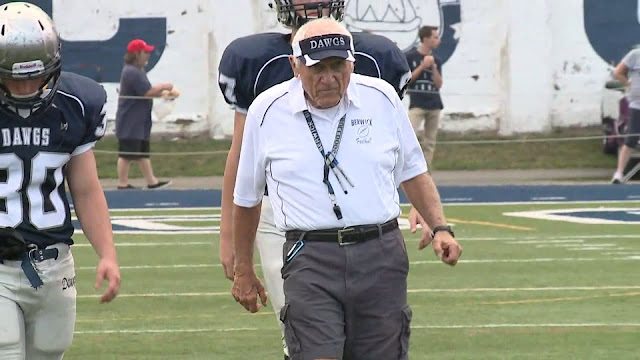 Back at the old shop, I covered high school football for all or part of five seasons.  We did a game of the week, plus several playoff and championship games.  I served as sideline reporter.  It was great fun, and I treasure the experience.

Berwick was having a tremendous run back then, so I prowled the sidelines of Crispin Field and all the playoff venues on a regular basis.

I can't say Coach Curry and I were friends.  I brought the newsman's edge to sports, and I don't think he really liked that.  Curry was used to adulation.  I was used to asking tough and occasionally difficult questions.

As I've said in this space before, I found Curry to be easily irritated and thin skinned.  He watched the tapes.  If I said something he didn't like, I'd hear about it the next week.  It didn't bother me.  It came along with the territory, and I wasn't there for the approval of those I covered.  I believed I was fair back then.  Still do.

The evidence is anecdotal, but George Curry had to be the most investigated coach of his era.  The "recruiting" rumors always dogged him.  Controversy was a constant companion.

The old shop used Curry as a color commentator a few times.  He was entertaining and knew how to dissect a game.   Funny when he needed to be, serious the rest of the time.   Curry traveled with an entourage, and never failed to stop to sign autographs.  My current shop used him for a WNEP2 show.  He was as sharp and entertaining as ever.  The people here loved working with him.

You can't overlook the fact that George Curry got a lot of his players in to college, and reliable sources say their graduation rate was very high.  I admire that.

George Curry also made sure his players had manners.  Interviewing the Berwick kids was always a positive experience.  They were disciplined and unfailingly polite.  That was the Curry influence.  The kids were great ambassadors of the game and their school.  I was on the field for a big Berwick loss at a state championship game in Altoona, and I genuinely felt bad for the kids.

Faith, family, and football were his priorities.

George Curry built more than teams at Berwick.  He built a program, and that foundation will be recognized for years to come.

He had a passion for the game, and a great knowledge of it.  It's a shame that it was taken away.  George Curry had a lot more to give.
AT 12:00 AM