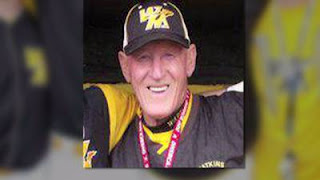 Former WBRE sports director Jim Miller died over the weekend.  He was 74.

In a Sunday morning Tweet, I noted that Jim was a "class act."  I really didn't like that phrase, but Twitter limits you to 140 characters and you have to write really tight.

Our paths crossed several times over the years.  It was always pleasant.  Jim knew sports.  He had that gravitas, but he also knew how to have a little bit of fun along the way.

I'm not going to say I knew him well, but I did know him a little, and what I saw, I liked.

Jim Miller contributed a lot to sports in our area-- liked and respected by high school athletes, their parents, coaches, and viewers.

My deepest condolences to Jim's family and friends, and the staff at WBRE.
AT 12:00 AM