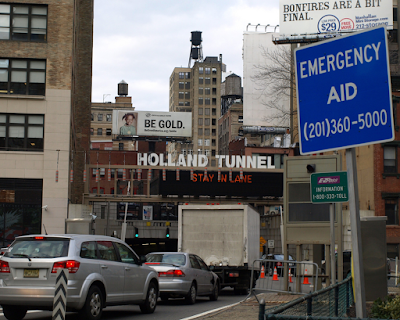 It's funny what can trigger a memory.  It's even funnier when a not so humorous event can make you smile.

At the risk of being politically incorrect, it's time for a story.

Three people were charged this week, after they were found in a truck filled with guns, entering the NY/NJ Holland Tunnel.  They said they were out to rescue a teenager who was using drugs in New York City.

Flash back to Marywood College, Scranton, PA in the late 70's and early 80's.  A classmate repeatedly called one of her friends the "Holland Tunnel."  The implication was that there was nothing between her ears.  It was done to be cute, not mean.  We all got a chuckle out of it, including the target of the nickname.

It might have been true in personal affairs and "real life."  In school, especially our communications major, I thought she was pretty sharp.  She was also a delightful woman, a joy to be around.

What is "The Holland Tunnel" doing now?  She's an executive with a clothing company in another state, and makes enough money to buy and sell her classmates.