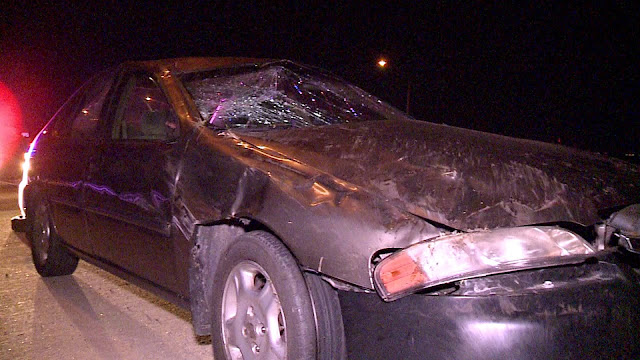 My job is never dull, and every once in a while, something comes along that defies analysis.

Case in point:  early yesterday morning.  There was a crash on the Casey Highway in Dunmore, right at that tangle where the Casey meets Interstates 81, 84 and 380.  A car flipped and rolled.  But, there were no victims.  There wasn't even a car.  I sent photographer Erich to check it out.

As luck would have it, the car rolled three times and landed on its wheels.  The driver and his passenger were unhurt.  The driver told Erich that he didn't want to call,  and couldn't afford to pay for a tow truck, so he decided to drive the car home to Carbondale.

I should add the driver also told us he's had the car only four days, and he just had the brakes re-done.  He should ask for a refund on those brakes.

There were some flaws in the "drive it home" plan.  You can see the shattered windshield.  Visibility was near zero.  Here is the big fly in the ointment.  One of the tires was shredded in the initial crash.

Let's try to figure this one out.  It's the cost of a tow truck versus the cost of the damage inflicted by driving on three tires and one wheel.  I would have called the tow truck.  The driver took the other route.

State Police caught up with the damaged car at Archbald.  Friends came to change the tire.  Police told the driver he could limp home as long as the headlights worked.  They did.  I should also point out that the driver had not been drinking.

Police and first responders said this was a new one on them.  Me too.

I love my job.