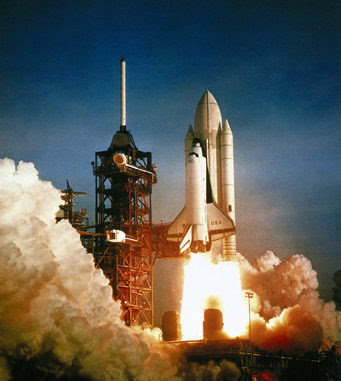 Today is the 40th anniversary of the initial launch of Columbia, the first space shuttle.  It was America's first reusable spacecraft, and America's first manned space launch in six years.

For a kid who grew up with the Gemini and Apollo programs, I remember thinking the shuttle was a neat idea, but it didn't blow me away.  Like the rest of America, I watched that first launch, thinking of all the possibilities.

What really impressed me was the landing two days later, on a dry lake bed at Edwards Air Force base in California.  It seemed much more dangerous to me, and infinitely more interesting.  The shuttle had no engine.  It came in as a glider, and the landing appeared to be such a tricky maneuver.  Everyone wondered if the heat shield tiles would hold.  They did.

I vividly remember the TV news anchors, especially ABC's Frank Reynolds, sitting at a desk near the landing site.  The wind blew his tie straight out, and he had to wear goggles as the protection from the blowing sand.  Columbia and its crew nailed that first landing.

Of course, you can't think about the shuttle program and its 135 missions without remembering how Challenger and Columbia were lost.  14 astronauts killed.

Now, we rely on the Russians to get us in to space, and that's a disappointment.  It looks like private industry is picking up the ball down the road.

There is talk about going back to the moon, and launching expeditions to mars.  Space travel is more than advancing science.  It's a source of pride.  We've lost a lot of that.

It's also a source of wonder, no matter what your age.