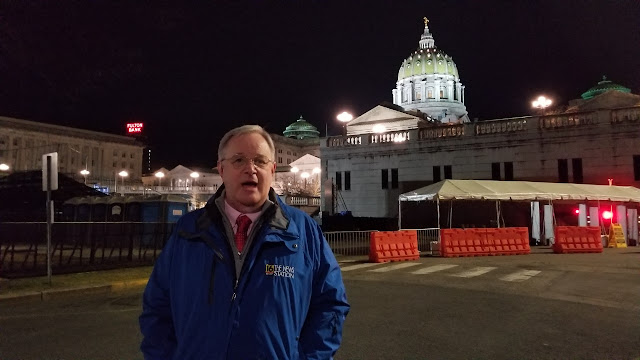 It started with a newsroom conversation a few weeks ago.  Our morning executive producer, Brigid, asked if I'd be interested in a trip to Harrisburg on inauguration morning.  I agreed, but added she should ask around.  I'd step aside if someone else really wanted the experience.  After all, the Shapiro inauguration would be my fourth.  As the great Harry Anderson once said, there comes the time to step off the merry go round and give someone else a turn.
SIDEBAR:    My first inauguration was in 1987.  I covered Governor Casey's first day in office for WARM.  It was a great time. It was just me, my tape recorder and a giant microphone.  Security wasn't what it is today, and I was allowed to wander about.  There was a nice moment on the capitol steps, right after the ceremony ended, when I had the chance to ask the new governor a few questions as he strode back in to the building.  Try that today.  I went to the inaugural ball in Hershey that night, and I admit that was not my best work.  Looking back, I think a radio kid was too intimidated to really get in there and capture the color of the night.
My next inauguration was the day Tom Ridge was sworn in,  in 1995.  I had moved to WYOU by then.  My task was to do a preview for the morning news and a piece for the evening news.  Anchor Rich Everitt had the main evening stores, plus the inaugural ball.  It was a fun day.
I was back in the preview business by the time Tom Wolf rolled around in 2015.  Photographer Jason and I drove in to Harrisburg early in the morning and we took off after Newswatch 16 This Morning ended.  It was a good mix-- veteran reporter and young photographer.  It was nice to see his enthusiasm at covering a big event, even if it was a preview, hours before the swearing in.
Okay, back to 2023.  A few days after that initial conversation with the morning executive producer, Brigid,  I was told I was the guy.  No problem.  I then took a deep dive in to the WNEP archives and came up with two pieces.  One was an election year in review.  The other was a look back at Josh Shapiro's six years as attorney general.
As is my wont,  I banged out the pieces rather quickly, but I did tweak a few times leading up to inauguration day.  It was a trip back to the office last week, on one of my days off, to record my narration.  The pieces were then handed off to photographer/editor Jason.
Inauguration morning arrived.  I was in the office around midnight just to do some reading and to see if anything needed to be changed.  It all looked good.  Jason and I headed for Harrisburg around 1:45 am.  Yes, it was early, but I factor in time to visit a rest stop on the way.  Plus, I like to do a site survey upon arrival.  That always takes a few minutes.
We checked out the lay of the land.  There was a media area on Commonwealth Avenue.  I didn't like that.  I've never been one for the pack/herd mentality on events like this.  Jason and I spied an angle we liked better.  It did involve parking in a restricted VIP area and driving the wrong way on a one way street.  The latter was not an issue.  The road was blocked off, anyway.  When we hit the sweet spot, a security guard approached.  I pleasantly explained who we were and what we hoped to accomplish.  I added that we would vacate the premises by 7:00 am.  The guard could not have been nicer and more professional.
If one thing went wrong, it was this.  I overdressed for the cold, and Harrisburg wasn't all that bad.  There was a bulky sweater and a puffy vest beneath my WNEP coat.  I should have shed the vest.
Television is much easier these days.  We're not tied to a big truck.  The gear is lighter and portable.  We can wander at will.  Jason lit me, and framed me nicely, and the morning broadcast looked great.  The dome is a stirring sight, especially at night.  After our last update, at 6:30 am, it was back in the car for the ride home.
There was a complication.  Rain approached and there was the possibility of freezing rain.  Jason and I repeatedly checked the weather radar on our phones.  It didn't look good.  Just what you need on a road trip!  Luck was on our side.  We encountered one fast sprinkle as we left Harrisburg and it was dry all the way home.
Harrisburg, see you in eight years!
AT 12:00 AM