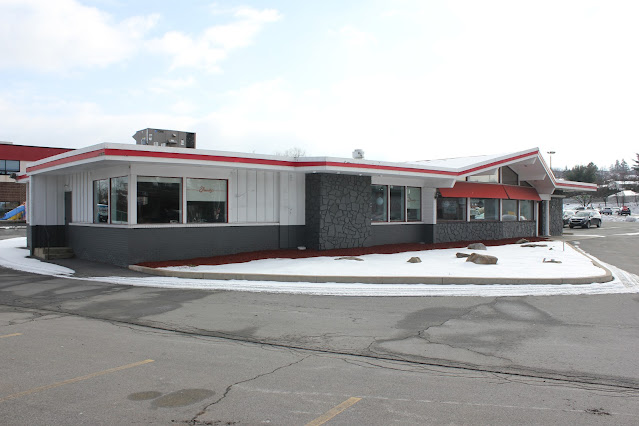 This Friendly's restaurant in Dunmore closed late last year.  I'd been there a few times.  The food was fair, at best.   I didn't hate it, but it was nothing to write home about, either.   The ice cream was good.  I'm sorry for the people who lost their jobs and the people who did like it here.  Otherwise, I shed no tears.

However, I was here dozens of times when the place was known as Franklin's.

Let's take you back to the early 80's.  My friend Jerry and I were working the evening shift at competing radio stations, and that didn't get in the way of our friendship.  I met Jerry in 6th grade, back in 1972.  It was one of the very few decent things about my 6th grade experience.

Anyway, Jerry and I would meet here after work, at midnight, or slightly later.  We would both order the same thing, every time:  a turkey club and fries.  Diet colas.  Over a pretty good sandwich, we'd talk radio and solve all of the industry's problems.  It wouldn't happen every night, just once or twice a week.  We'd spend hours in one of the booths, talking about what we would do if we were in charge, what the other stations in town were doing, industry trends, etc.  The waitresses didn't mind.  It was slow and there was no big demand for a seat in the restaurant so early in the morning.  Plus, we were decent tippers and didn't cause any problems.  I dropped in alone, to grab a seat at the counter some mornings when Jerry couldn't make it.

The midnight radio conventions at Franklin's ended when we moved to different shifts, and I don't recall who went to days first.

We both had a passion for the business.  Jerry successfully programmed some local stations before moving to the Lehigh Valley, where he is still keeping some radio stations humming nicely.  I stayed in radio until 1991, and I still enjoy listening to it, and writing about it.

As for the building, who knows?  We've become a "take out" society, so I doubt another restaurant will move in.  It's a great location, right off Interstate 81 and the O'Neil Highway.  The lot isn't as big as you might think, so I doubt it will become a mega mini mart, although it would be nice.  I have a feeling it will be razed for additional parking for the adjacent YMCA.

Some great radio ideas came out of that building.