Olyphant native Michael Metrinko was part of the group.  Our hearts ached as we watched his family here at home struggle with 444 days of captivity, and we shared in their joy when Michael finally made it home.

Iran, with the Shah gone, became an enemy.  The middle east was even less stable.  President Jimmy Carter looked incompetent, and the crisis helped Ronald Reagan sweep into office.

And then, there was ABC News. 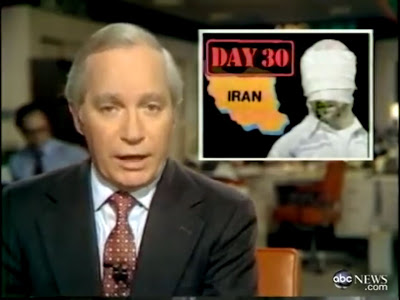 ABC was making a major push in the late 70's.  The relatively new "World News Tonight" was getting noticed.  News president Roone Arledge was making big hires, spending big money, and he had the news division firing on all aggressive cylinders.

ABC decided to do a 15 minute update at 11:30 every night.  It was anchored by Frank Reynolds and when he need a break, Ted Koppel took the anchor chair.  The broadcast morphed into "Nightline."  It became must see TV, with live reports on breaking news and Koppel's sharp and incisive interview style.

"Nightline" has seen some changes in recent years.  As someone who is around late at night and early in the morning, we frequently receive notices that "Nightline" is reacting to breaking news and bringing in fresh video.  It spawned some imitators.  "NBC News Overnight" was great until the network pulled the plug.  CBS had "Up to the Minute."  It too produced some great stuff, until the network decided to deploy its resources elsewhere.