Two of the most talked about movies over the weekend were "It's a Beautiful Day in the Neighborhood" and "The Irishman."  I have a connection to both.

I met Fred Rogers in the mid 90's.  He was at the Crayola factory just outside of Easton to preside over a milestone in crayon manufacturing.  I think it was number 10 billion, or something like that.

I never watched his show.  I was a Captain Kangaroo kid growing up, but I have to say Fred Rogers was the real deal.  What you saw on tv was what you experienced in person.  He charmed the socks off a bunch of cynical journalists, simply by being himself.  I'm sorry I never kept a copy of the Crayola story.  I assume it's gathering dust in a Wilkes-Barre basement, like so much of our area's history. 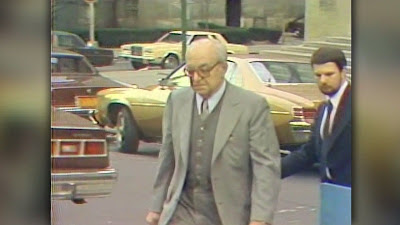 I nearly met Russell Buffalino, one of the key figures in "The Irishman."  To quickly get you up to speed, the movie, and the book it's based on,  allege Buffalino ordered the hit on Teamsters boss Jimmy Hoffa.

Buffalino served prison time for his ties to organized crime.  I was at WARM 590 when Buffalino was released.  WARM news director Jerry Heller sent me to Buffalino's home in Kingston to see if he was around.  I was naive, or brave, or both, and I went for it.  I knocked on his door.  No one answered.  I waited for a few minutes.  Nothing.  I left.  Dejected.  I really wanted that interview.

Will I see "It's a Beautiful Day in the Neighborhood?"  Maybe if I can get my hands on a DVD.  I can't see going to a theater.

I won't subscribe to Netflix to see "The Irishman."  Both movies are getting great reviews.  I love Joe Pesci, but the thought of enduring 3.5 hours of violence just doesn't appeal to me.
AT 12:00 AM