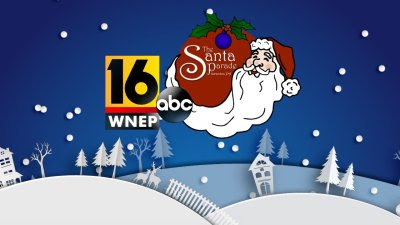 This is my favorite memory of the Scranton Santa parade, and it's kind of off the wall.

I was with my WNEP coworkers at the starting line several years ago.  Like most parades, it was late to start.  To stay warm and keep the blood moving on a cold December morning, I started walking around our staging area, Wyoming Avenue.  Yes, the route is different now.

I was saying hello to some old radio friends, and some people in the crowd.  I bumped in to Santa.  We started to chat.  He was asking me about the weather and some things he saw on that day's edition of Newswatch 16 Saturday Morning.  All I could think about was, Holy Cow!  Santa is calling me by first name and he watches me on the morning news.  I was blown away.

I guess it's true.  Santa knows all.  I have to work a bit harder to get off his "naughty" list.

As the years have elapsed, my schedule doesn't allow me to be at the parade in person.  I'll be watching Ryan's live reports as I'm at the anchor desk for Newswatch 16.  Then, Scott, Stacy, and Ryan have wall to wall parade coverage beginning at 9:30 AM.  We'll have a wrap up on Newswatch 16 Saturday night and again Sunday morning.

By the way, my friend, The Prospector from Rock 107 is this year's grand marshal.

If you can, be there.  The Scranton Santa parade is one of our area's "most funnest" events.  If you can't, watch it on TV.