Welcome to the (Lack of) Party! 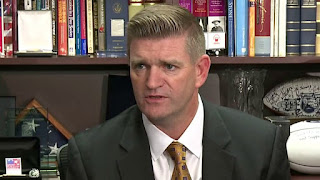 State Senator John Yudichak, who represents Luzerne and Carbon Counties made the announcement Tuesday.  He's leaving the Democrat party and will become an independent. Yudichak says he did it because of divisiveness in the system, and he sees too many people who put political party over what's best for the people.

The skeptic in me raises an eyebrow over this.  I think there's more to the story, and it will manifest itself in time.  I've met the senator a couple of times and have watched his work over the years.  I always believed he's a man of higher ambitions, and I'm surprised he has stayed put in the senate for so long.

The Harrisburg Patriot reports Yudichak will caucus with the majority Republicans, and could get committee assignments from the Republicans.

Hmmm...  Republican Donald Trump captured Luzerne County is 2016.  Luzerne County Council now has a Republican majority.  Is Senator Yudichak reading the tea leaves?  He is up for reelection in 2022.  Siding with the majority party might help in keeping Retreat State Prison and the White Haven Center open.  If Yudichak can pull that off, they will erect a statue of him in Public Square.

Be that as it may, welcome to independent status, Senator Yudichak.  I've been an independent for years and years.  I have never missed an election in which I have been eligible to vote, and yes, independents have to sit out primaries, unless there is a ballot question.

I became an independent because I sat down one day and realized no political party really represents my views.  I choose my issues a la carte.  Conservative on some things.  Liberal on others.  Centrist on most.  It has nothing to do with being a journalist and being impartial.  In fact, I'm probably one of the most opinionated people you will ever meet.  You should hear some of our newsroom and news truck discussions (or arguments).  Like my coworkers, the "opinion" part of my brain goes in to "park" when I settle behind a newsroom computer keyboard, sit at the anchor desk, and pick up a microphone out in the field.