There is a lot about pop culture and social media I don't understand now, and probably never will understand.

I'll write what I believe is a thoughtful and interesting piece here, or on Facebook.  It won't move the needle.  Do something goofy, and hits go through the roof.

That's OK.  I've learned that's how things work.  While there is plenty of information available via social media, it's generally used for fun and entertainment.

There is a parallel to be drawn here.

I don't know when the WNEP Backyard train first appeared.  I don't know why it was put there.  I suspect it was a fun way to dress up the hill behind the waterfall.  Retired Chief Meteorologist Tom Clark likes trains, and so do I.  My desk is near the windows looking out in to the backyard.  In times of stress, I do glance out there and watch the train circle again and again.  Even in the middle of summer, a toy train takes you back to Christmas as a child.  I can still see it in my mind.  Part of it makes me sad because those days are long, long gone, never to return.  The majority, though, makes me smile.  Great times.  I was so lucky.  Still am.

We've provided accurate forecasts from the backyard for years, but once in a while, something flares up-- like decorations, or a plant.  We had a great debate over a weepy looking evergreen out there.  It all pales in comparison to the train. 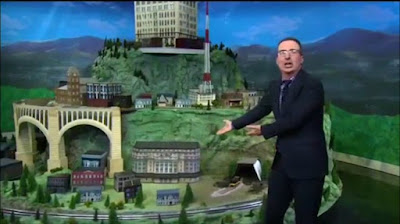 Talkback callers apparently caught the eye and the ear of John Oliver and his HBO staff.  It's been a running joke for a while.  Oliver took it to the next level by building a fantastic train display, and offering to give it to the station.  Even though I'm on vacation, my Twitter and e-mail lit up.  Will the station accept the gift?  What will we do with it?

I can't speak for management, but we will take it.  One of our managers solicited staff suggestions, and it seems just about all of us are on the same page.   I can't go into detail because plans aren't in concrete.  All I can say is I believe a lot of good will come from this.

There is one other issue that needs to be addressed.  Many feel Oliver is making fun of our viewers for caring so much about the backyard train.  I stopped subscribing to HBO when "The Newsroom" ended production, but I have seen the clips from Oliver's show.  I can't mike up my mind.  Like most things, the truth lies somewhere in the middle.  Yes, there might be an edge to Oliver's comments.  I honestly don't think it's that big of a deal.  We've been through worse.

John Oliver, thank you for the train.  I'm looking forward to its arrival here in our area.