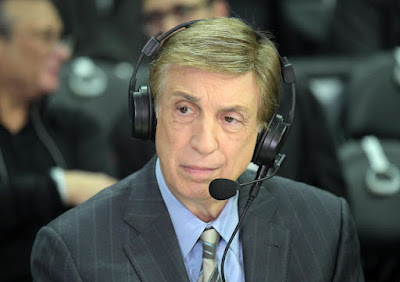 Sports broadcaster Marv Albert retires at the end of the current NBA season.   He'll turn 80 next month and it's safe to say he is the best basketball broadcaster-- ever.  He's been doing it for 60 years.

Albert was more than a courtside fixture.  He handled the NBC baseball pre game show for a while.  He called NFL games on TV and radio, and he wasn't afraid to poke fun at himself during appearances on David Letterman's NBC show.  If that wasn't enough, he did the nightly sports on WNBC TV for years.

Albert lost all of his jobs in 1997 after some embarrassing behavior went public.  There were criminal charges and plenty of tabloid fodder.  Albert paid the price, was knocked down-- hard, and got back up.  There are two lessons here.  The first is to behave.  Glass houses.  The second is to never give up.

New York Post columnist Phil Mushnick wrote that no one prepared for a game more thoroughly than Marv Albert.  That made me smile.  You know my theory on prep.  Do a ton, and then park it in your brain.  Pull it out when you have to, when the moment calls for it.  Don't pull it out just to prove how smart you are.  Marv Albert did things the right way.

Marv Albert will be missed.