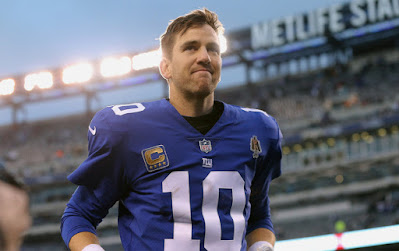 I admire loyalty and I always have.  Some friends have stuck by me, in good times and bad.  I like to think I've returned the favor.

Loyalty in the corporate and business world can be elusive.  For the most part, I've been exceptionally lucky.  I've worked for some really good people and they always received 100 per cent from me.

That brings us to Eli Manning.  The retired NFL quarterback is returning to the Giants in a non playing role.  He'll be doing things like corporate relations and marketing.  I'm not a Giants fan, but I'm glad the team found a place for him.  Eli Manning wasn't among the league's greatest talents.  However, he did step up when it was on the line, beating the legendary Tom Brady in two Super Bowls.

Manning could have hooked on with another team after his Giant days were done.  He didn't.  The team rewarded Manning's years of loyalty with a really great job.  He's earned it.