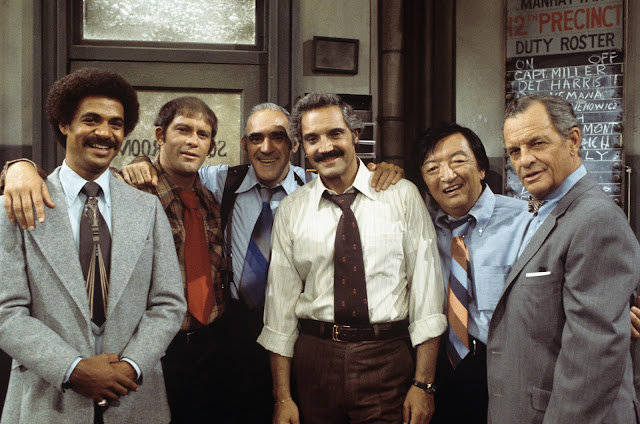 It was one of my favorites from day one, and throughout the 7 and a half year run.  I have the boxed set on DVD, and I pop one in any time I have a bad day.  Those DVD's are getting a workout.

Johnny Carson called "Barney Miller" one of the best written shows on television, and Carson knew his comedy.  In fact, the writing led to the show's demise.  "Barney Miller" was not cancelled.  Production stopped because the producers couldn't find the writers they wanted and needed to carry on, and they didn't want to repeat story lines.

I met Hal Linden back in the 80's.  He was in Wilkes-Barre to campaign for a U.S. Senate candidate.  I was tough, quizzing Linden on Pennsylvania issues he knew nothing about.  In retrospect, I was too hard on the guy and Hal, I'm sorry.

"Barney Miller" checked all the boxes.  While the cast and the writing were top notch, Linden says early on, they rightly realized the comedy came from the people coming through the squad room, and the cast reaction only added to it.  Linden said the regular cast members were actors, not stand up comedians, and that added to the quality of the show.  They were all OK if they didn't deliver the punch lines and the break through lines.

The show is still on one of the TV rerun channels, and I punch in as often as I can, even though I have the DVD's.  It was funny then.  It's funny now.  There are times TV gets it right.